become a
LEGALLY ORDAINED
PRIEST OR PRIESTESS
OF CTHULHU
**FREE** 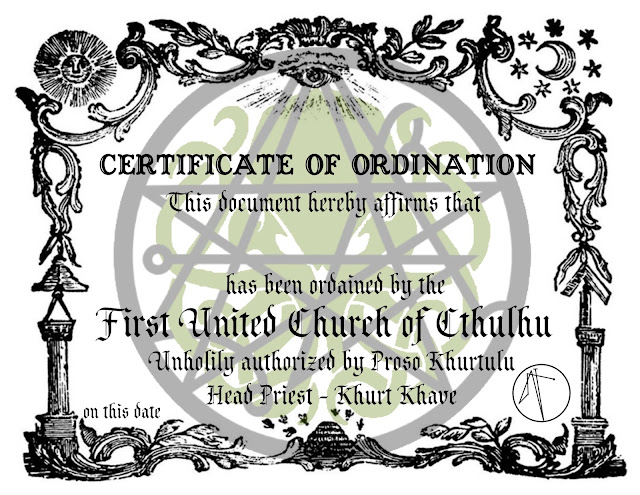 The First United Church of Cthulhu is a legally registered nonprofit religious organization. Here in Arizona they do the separation of church and state the right way (most of the time). People's religious beliefs and their position within those hierarchies are not questioned by the state. Other states unfortunately are not as open and require proof that someone is really part of their specified religion. Priests/Priestesses outside of the U.S. will have to check with their local authorities on what is required.


This video has detailed information about the priesthood.
CERTIFICATE OF ORDINATION

Here is the link for the Certificate of Ordination for priests of the First United Church of Cthulhu. This site wouldn't host the full resolution image so you'll have to use the link. The certificate is formatted at 300 dpi and standard 11 x 8.5 paper size so all you have to do is download and print!

Print or sign your name in the center and put the date of your ordination in the lower left corner. If this is to be used as evidence of your priesthood with a governing body for the purpose of performing a wedding please use your real name as recognized by the state under which you will be signing the marriage license. We suggest opening the jpg in a graphics program and using a really cool font to fill everything out.

You are the gibbering voice, the insanity-inducing dreaming mind blast, the writhing real world living tentacle of Cthulhu! As the head priest and exalted avatar of Cthulhu I ordain thee as a priest of Cthulhu. As such, you are granted by the power of Cthulhu to physically sign your own Letter of Good Standing. Or ordain a friend and have them sign it.

If you really need my signature as the Head Priest it's gonna run you $30 via Paypal to bitter_venus [at] yahoo [com].

But that includes shipping and the cost of having it notarized. And I'm sorry your state sucks. You should really summon a few star-spawn and take care of that problem.

TO WHOM IT MAY CONCERN

This is to certify that [Your Name Here] is a member in good standing of the First United Church of Cthulhu. [Your Name Here] was ordained on [Enter Date of Ordainment] and we grant them the authority to perform all religious rites of the church including the sacrament of marriage. This priest's credentials have no expiration date.

You can add the legal registration information for the church if the Deep One hybrid clerk doubts our authenticity. Damn fishmen ruining religion for everybody.

The First United Church of Cthulhu is a nonprofit religious organization legally registered with the Arizona Corporation Commission File# 20493534. Our Character of Affairs as listed therein is to “worship and celebrate our god Cthulhu.” 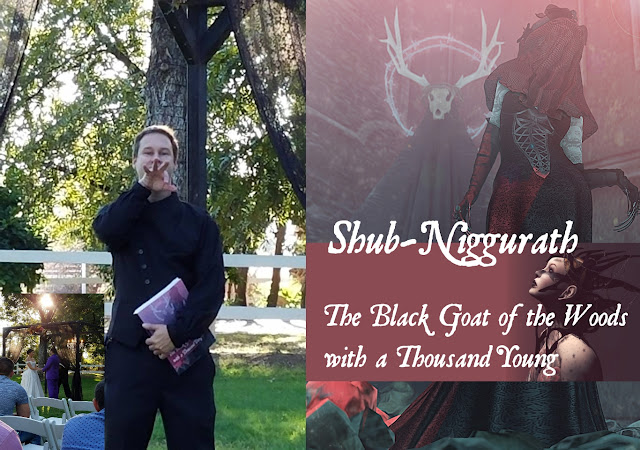 This is a picture from the first wedding I officiated.
Here I am giving our official Cthulhic greeting, the chin tentacle salute, before the wedding.
You can see that I am holding the (un)holy tome of
Shub-Niggurath - The Black Goat of the Woods with a Thousand Young.

These are a collection of various Lovecraftian vows which you can use when performing a marriage. Mix and match as you deem necessary.

Yog-Sothoth knows the gate. Yog-Sothoth is the gate. Yog-Sothoth is the key and guardian of the gate. Past, present, future, all are one in Yog-Sothoth. And so it is that today we are gathered here to unite [Being #1] and [Being #2] as one. These rings are a symbol of Yog-Sothoth's congeries of iridescent globes, his malign suggestiveness is now also their malign suggestiveness. These rings are the key and guardian; the gate is their future together. Let all behold them as they enter into a world of new tomorrows, knowing that no Old Ones may break them apart nor tread them asunder.

That is not dead which can eternal lie, and with strange aeons even death may die.
I, [Being #1], take you [Being #2] to be my [husband/wife/shoggoth/world destroyer/etc], to have and to hold from this day forward, for better or for worse, for richer, for poorer, in sickness and in health, to love and to cherish; from this day forward until strange aeons draw us into eternity.

What do we know. . .of the world and the universe about us? Our means of receiving impressions are absurdly few, and our notions of surrounding objects infinitely narrow. We see things only as we are constructed to see them, and can gain no idea of their absolute nature. With five feeble senses we pretend to comprehend the boundlessly complex cosmos, yet other beings with wider, stronger, or different ranges of senses might not only see very differently the things we see, but might see and study whole worlds of matter, energy, and life which lie close at hand yet can never be detected with the senses we have.
But there is a sixth sense – love. It cannot be quantified but it can measured. Though invisible it can be seen. Though insubstantial it can be felt. Today, their two worlds collide creating a new, unified reality that not even strange aeons can undo.

There is no sharp distinction betwixt the real and the unreal; that all things appear as they do by virtue of the delicate individual physical and mental media through which we are made conscious of them; but the prosaic materialism on the majority condemns as madness the flashes of super-sight which penetrate the common veil of obvious mechanism.
In other words, for better or for worse, in sickness and in health, for richer or for poorer, until those strange aeons in which even death may die.

Life is a hideous thing, and from the background behind what we know of it peer daemoniacal hints of truth which makes it sometimes a thousandfold more hideous. Yet [Being #1] and [Being #2] have defied such astronomical odds and found that truth in one another. And together, each makes the other's life about 999 times less hideous.

I screamed aloud that I was not afraid; that I never could be afraid; and others screamed with me for solace. We swore to one another that the city was exactly the same, and still alive. [Being #1] and [Being #2] have found solace in one another within this realm of cosmic indifference. Today they swear to one another their love and devotion, and to stand side by side, taking on the chaos and madness of this uncaring sphere together until strange aeons may part them. Together they scream aloud to the ubiquitous caucus of preternatural providence that they shall not be undone by any exoteric transgressions.

And like the Crawling Chaos, they have come down through the gloaming from the stars. Now all is over, and beyond the Arinurian streams they shall dwell blissfully in Teloe.

The most merciful thing in the world, I think, is the inability of the human mind to correlate all its contents. We live on a placid island of ignorance in the midst of black seas of infinity, and it was not meant that we should voyage far. We are gathered here together to witness the communion of [Being #1] and [Being #2] as they have chosen to journey together through the darkest of indignations and perfunctory agency.

The true function of phantasy is to give the imagination a ground for limitless expansion, and to satisfy aesthetically the sincere and burning curiosity and sense of awe which a sensitive minority of mankind feel toward the alluring and provocative abysses of unplumbed space and unguessed entity which press in upon the known world from unknown infinities and in unknown relationships of time, space, matter, force, dimensionality, and consciousness.

The Call of Cthulhu